Now the DIY nickel plating is getting better and the plated parts are getting bigger  I had to find out what the thickness of the nickel plating would be after a certain time. According to many sources a thickness of 5 micron (0.005 mm) is the minimum to keep the plated part in a nice condition. To give you an idea about thickness; standard aluminium foil is ca. 16 micron (0.016 mm) thick.

Luckily there's a formula to calculate the thickness of the plating; it is based on Faraday's law

You don't have to understand how and why, just fill out the numbers for your plating recipe :)
Uhh......, OK, most of the needed numbers can be looked up:

If I leave the object for, lets say 2 hours (7200 seconds) in the electrolyte with the 350mA power source, we'll get the following thickness:

If you wanna plate both sides, simply double the time.

So if I leave it for a bit over 2 hours in the solution it should be thick enough. But if you like to polish allot better go for 10-15 micron.

Another important thing:
To calculate the thickness, use the Current (I) you directly measure in the circuit between the pos (+) and Cathode!!! It will be different then what you read on the charger (which is the max current).

I still had to sand and plate the Yamaha tail light. It was in really bad shape as you can see on the pics.
After a couple of hours it was smooth enough (grit 2000). If you do a really good sanding job it should look almost the same as a plated part. The hardest part was the groove. I couldn't get it super smooth but the tail light is looking way better then before. Another "problem" was that it couldn't be totally dipped in acid because of the mirror bowl.  Anyway... after using Faraday's law I choose for a bit over 3 hours plating with the 350 mA phone charger. That should be enough time to give it a thickness of around 15 um. 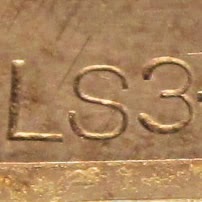